The History of Russian dolls

The history of Russian Matryoshka dates back the latter stages of the 19th century, although there are a number of theories as to how matryoshka first appeared. One theory is that it all began when a small toy figure of a kind, old Japanese gentleman was brought to Mamontov’s toy shop in Moscow. The figure of Fukurum, who was meant to bring happiness, prosperity and wisdom, could be opened to reveal his four pupils all inside each other. It is believed that this Japanese toy became the inspiration for the world famous Russian Matryoshka dolls that we now know and love.

The shop's wood-turner, Vasiliy Zvyozdochkin, made the origianl figures, with painter Sergey Malyutin bringing them to life as boys and girls. Their legacy lives on to this day with traditional dolls still being made in numerous craft and toy shops across Russia. 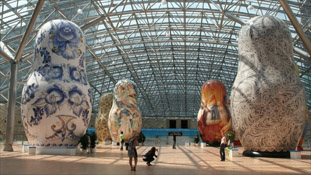 As well as their simple beauty and timeless elegance, Russian dolls possess something that is quite difficult to measure or explain. It is a certain magical charm that attracts the soul, which cannot be atributed just to the bright colours or detailed paintings. There is something quite peaceful and relaxing about Matryoshka dolls, which may have to do with the positive energy that Russian dolls give out wherever they go. After all, Russian dolls have always carried a simple and everlasting message of friendship and love, something that everyone can relate to no matter where they are from.

Or maybe it is because Matryoshka has always been regarded as a symbol of nurture and motherhood? As if representing Mother Nature herself, the Matryoshka protects her young ones within as an expression of the family on an everlasting journey.